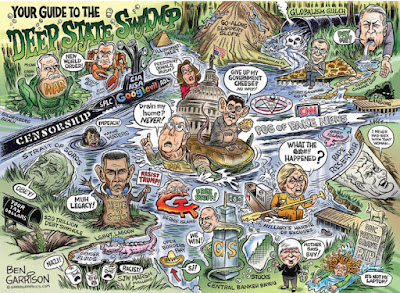 Click image for larger size.
"Swamp Thang"
by Jim Kunstler
"There’s the Swamp teeming with scaley, slithery, sharp-toothed, many-footed predators, but then there’s the miasma hanging over the Swamp, a toxic mist of lies, misdirection, dis-info, propaganda, bad faith, and sedition, illuminated by pulsing blue gaslight that affords a toxic blanket of protection to the denizens of the Swamp. Now a storm is brewing. The critters are evacuating their mud-holes and moiling about desperately among the cypress knobs as a mighty wind rises - the election hurricane - threatening to sweep it (and them) all away!
The climate is changing, all right, but not in the way that some think it is. The political climate is changing, and what has been a pestilential subtropical sink on the Potomac is overdue for that cleansing we’ve heard about. Weeks from now, as the fetid water subsides, the protective miasma above will dissipate and the people from sea to shining sea will finally get a good look at the landscape revealed and the pitiful, wriggling, dying life-forms of the order Democratica stranded on it.
Case in point: Joe Biden. Many will wonder in the days to come whether the sole and otherwise inexplicable reason for his elevation to candidate-for-president was a ruse to avoid prosecution - his own and others. The matter was neatly laid out a year ago during the impeachment ploy: After the color revolution in Ukraine, 2014, Mr. Biden was designated not just “point man” overseeing American interests in that sad-sack country, but specifically as a watchdog against the notorious deep corruption of Ukraine’s entire political ecosystem - as if, you understand, the internal workings of Ukraine’s politics was any of our business in the first place.
The evidence aired publicly last year suggests that Mr. Biden jumped head-first and whole-heartedly into the hog-trough of loose money there, netting his son Hunter and cohorts millions of dollars for no-show jobs on the board of natgas company, Burisma. And then, of course, Mr. Biden stupidly bragged on a recorded panel session at the Council on Foreign Relations about threatening to withhold US aid money as a lever to induce Ukraine President Petro Poroshenko to fire a prosecutor looking into Burisma’s sketchy affairs. Naturally, the Democratic Party impeachment crew accused Mr. Trump of doing exactly what Mr. Biden accomplished a few years earlier.
The impeachment fizzled, but the charges and the odor of the Biden-Burisma scandal lingered without resolution - all the while that Mr. Biden posed as a presidential candidate in the primaries. This week two Senate committees (Finance and Homeland) are expected to release a joint report detailing findings of their investigation into the Biden family’s exploits abroad. It is expected to not look good. Also implicated are the State Department officers in the Kiev embassy who pretended not to notice any of this, pointing also to their engagement in further shenanigans around the Trump-Clinton election of 2016 - a lot of that entwined in the Clinton-sponsored RussiaGate scheme. Will the committees be so bold as to issue criminal referrals to the Justice Department? If Mr. Biden actually shows up at next week’s debate, do you suppose that Mr. Trump will fail to bring up the subject? Does this finally force Mr. Biden’s withdrawal from what has been the most hollow, illusory, and dispirited campaign ever seen at this level in US political history?
All of which is to say that the Democratic Party has other things to worry about besides who will replace Ruth Bader Ginsburg on the Supreme Court. That may be hard to believe but it’s how things are now after four years of implacable, seditious perfidy from the party. A week ago, all the talk was of the Democrat’s election coup plan, as publicized stupidly by the so-called Transition Integrity Project. Nice try. What if all those mail-in ballots sent out recently have Joe Biden’s name on them and it turns out that he is no longer a candidate? Hmmmm… No doubt the recipients were so eager to fill them in and send them out that there’s no going back on that scam. Apparently, a Biden withdrawal was not one of the scenarios scrimmaged out in the Transition Integrity Project’s “war game.” What? then A do-over?
Hence, panic in the swamp. Joe Biden’s misadventures, and his pitiful fate, are but the outer rainbands of the brewing storm. There’s the threat of further and widespread riots, of course, but since when has insurrection proved to be a winning campaign strategy in a country not entirely gone to the dogs? People who are not insane usually object to their businesses being torched and their homes invaded. At this point, after months of violent antics by criminal nihilists, one can even imagine Multnomah County, Oregon, turning Trumpwise. Closer to the eye-wall of the hurricane looms the stern visage of John Durham. That’s where the most damaging winds whirl and there is reason to suppose they are heading for landfall. Whatever he’s been up to lo these many months has had a tighter lid on it than the tomb of Tutankhamen. It must be making a whole lot of political gators, centipedes, and pygmy rattlesnakes nervous. Perhaps New York Times editor and miasma generator-in-chief Dean Baquet is up at three a.m. thinking about it, puking into his wastebasket."
- https://kunstler.com/
Posted by CoyotePrime at 8:06 PM