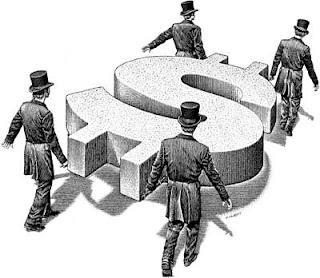 "Poisoning the U.S. Dollar"
By Bill Bonner
SAN MARTIN, ARGENTINA – "A friend wrote to caution us. It is way too soon to write an obituary for the U.S. dollar, he said. He is right, of course. We are now headed into a period of depression, political and social instability, and claptrap financial policies on a scale never before attempted.  The blowout inflation will come. But not right away. And in the short run, the dollar is likely to strengthen, not weaken. But while it is much too early to hang the black crepe, this is still a good time to visit nursing homes and perhaps pick out a burial plot.
Decline and Fall: No pure-paper money has ever lasted for an entire credit cycle. The dollar will not be the first to rest among the shades. In the meantime, we will watch its inevitable decline and fall – probably the biggest financial story of the next 10 years. Because down with the dollar comes the whole U.S. capital structure – stocks, bonds, debt, credit, pensions, insurance payouts, Social Security, Medicare, the empire… the whole shebang.
But we are not at the end of this story. We are only at the beginning of the end. Between the coronavirus pandemic, the debt, the Federal Reserve’s falsification of interest rates, the fake dollar, and the giveaways, the U.S. economy may already be in a perpetual recession. And the feds are determined to fight it with printing-press money.
Quack Medicine: In the first 20 years of this century, total U.S. debt, public and private, rose from $30 trillion to $80 trillion, while GDP only doubled. During this same time, the Fed “stimulated” the economy by increasing its balance sheet from only $609 billion to $7 trillion. And it also reduced its key interest rate from over 6% down to zero, keeping it below the level of consumer price inflation for over half of the two-decade period.
That should alert any sensible person: “Stimulus” theory is voodoo. You can drive up stock prices (making the rich richer) by giving Wall Street money. But you can’t make the real, Main Street economy work better by handing out money on street corners. No matter. The feds only have one quack medicine – printing-press money. And they’re going to stick with it, whether it works or not.
Hoarding Cash: At first, the extra money has little effect. Fearful of layoffs and bankruptcies, people hoard cash. That is what is happening now. People are not spending their money, they’re hoarding it. The president told them they didn’t have to pay their rents. Restaurants, retail, and travel are unappealing. So they stay home.
Savings rates quadrupled between January and April. CNBC elaborates: In fact, consumer credit tumbled at a post-World War II record 6.6% annual pace thanks in large part to a decline in credit card balances to $953.8 billion from $1.02 trillion. Student loan debt was little changed at $1.68 trillion, while auto loans edged higher to just shy of $1.2 trillion. That came as the federal government and businesses continued to ratchet up debt. In all, domestic nonfinancial debt totaled $59.3 trillion.
More Medicine: This is what happens in the first stage of the last stage. The velocity of money (the readiness of people to spend it quickly) goes down. Inflation rates may decline, not rise. In its second-quarter review, Hoisington Investment Management explains: "Considering the depth of the decline in global GDP, the massive debt accumulation by all countries, the collapse in world trade and the synchronous nature of the contracting world economies the task of closing this output gap will be extremely difficult and time consuming. This situation could easily cause aggregate prices to fall, thus putting persistent downward pressure on inflation which will be reflected in declining long dated U.S. government bond yields."
Meanwhile, Chicago Federal Reserve president and CEO Charles Evans says the economy is recovering nicely, but warned: "Every week and every month that we go without renewing additional fiscal support that we saw strongly sent out in the spring and summer, we risk a longer period of slow growth if not outright recessionary dynamics." If it is recovering so nicely, why the need for more medicine? You’d think that the economy needed regular doses, or it would naturally fall back into recession.
Large Doses: For the first 189 years of the Republic, the economy grew strongly, with not even a hint of the magic elixir (setting aside the War Between the States, when both sides did print money… and subsequently fell into recession). As recently as the late 20th century, growth remained healthy… with scarcely any money-printing. It wasn’t until 1999 – more than 200 years after the dollar was introduced – that the Fed began administering large doses of fake money. And then, it added $6.4 trillion to its balance sheet… as growth rates fell.
Slow Death: Fake money is the poison that will eventually put the dollar in its grave. But there’s no need to panic. No need to call the undertaker. It will take years for the toxin to do its work. Just remember, you don’t want to be holding your wealth in dollars when the organ music starts and the smell of lilies fills the funeral parlor."
- rogueeconomics.com.
Posted by CoyotePrime at 10:21 AM