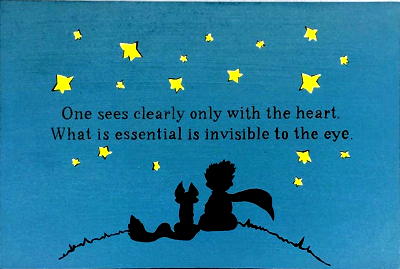 Free Download:
Antoine de Saint-Exupéry, "The Little Prince"
by Kirstie Pursey
“‘The Little Prince’, by Antoine de Saint-Exupéry, is a children’s story with some very profound meanings and some quotes that will really make you think. I have to admit that I never read the ‘Little Prince’ as a child. I think I wouldn’t have known what to make of it if I did. Even reading it as an adult I didn’t know what to make of it!
However, it is clear that “The Little Prince” touches on some very deep themes about the nature of life, love, friendship and more. The following Little Prince quotes show just how many philosophical themes are discussed in this small, but profound work.
The story tells of a pilot who crashes into the Sahara desert. He is attempting to fix his damaged plane when a little boy appears as if from nowhere and demands that he draws him a sheep. Thus begins a strange, enigmatic friendship that is both heartwarming and heartbreaking. The Little Prince, it turns out, comes from a small asteroid where he is the only living being apart from a rather demanding rose bush. The Little Prince decides to leave his home and visit other planets to find knowledge. The story tells of these encounters with rulers of strange worlds and de Saint-Exupéry has opportunities to demonstrate some philosophical themes that will make readers think.
On earth, as well as meeting the pilot, The Little price meets a Fox and Snake. The fox helps him to truly understand the rose and the snake offers him a way to return to his home planet. But his return journey comes at a high price. The book’s bittersweet ending is both thought-provoking and emotional. I would definitely recommend that you read “The Little Prince” if you haven’t already.
It is one of the most beautiful and profound children’s books there are. If you have older children, then you might like to read it with them as it can be a little overwhelming for them to read alone. In the meantime, here are some of the best and most thought-provoking Little Prince quotes:
• “It is only with the heart that one can see rightly; what is essential is invisible to the eye.”
• “A rock pile ceases to be a rock pile the moment a single man contemplates it, bearing within him the image of a cathedral.”
• “All grown-ups were once children… but only a few of them remember it.”
• “Well, I must endure the presence of a few caterpillars if I wish to become acquainted with the butterflies.”
• “Grown-ups never understand anything by themselves, and it is tiresome for children to be always and forever explaining things to them.”
• “The most beautiful things in the world cannot be seen or touched, they are felt with the heart.”
• “It is much more difficult to judge oneself than to judge others. If you succeed in judging yourself rightly, then you are indeed a man of true wisdom.”
• “It is the time you have wasted for your rose that makes your rose so important.”
• “I am who I am and I have the need to be.”
• “No one is ever satisfied where he is.”
• “One day, I watched the sun setting forty-four times……You know…when one is so terribly sad, one loves sunsets.”
• “People where you live, the little prince said, grow five thousand roses in one garden… Yet they don’t find what they’re looking for… And yet what they’re looking for could be found in a single rose.”
• “But the conceited man did not hear him. Conceited people never hear anything but praise.”
• “What matters most are the simple pleasures so abundant that we can all enjoy them…Happiness doesn’t lie in the objects we gather around us. To find it, all we need to do is open our eyes.”
• “Where are the people?” resumed the little prince at last. “It’s a little lonely in the desert…” “It is lonely when you’re among people, too,” said the snake.”
• “What makes the desert beautiful,’ said the little prince, ‘is that somewhere it hides a well…”
• “For me, you are only a little boy just like a hundred thousand other little boys. And I have no need of you. And you have no need of me, either. For you, I’m only a fox like a hundred thousand other foxes. But if you tame me, we’ll need each other. You’ll be the only boy in the world for me and I’ll be the only fox in the world for you.”
• “To forget a friend is sad. Not everyone has had a friend.”
• “Only the children know what they are looking for.”
• “Sometimes, there is no harm in putting off a piece of work until another day.”
• “I should have judged her according to her actions, not her words.”
• “Nevertheless he is the only one of them all who does not seem to me ridiculous. Perhaps that is because he is thinking of something else besides himself.”
• “The one thing I love in life is to sleep.”
• “The machine does not isolate man from the great problems of nature but plunges him more deeply into them.”
• “And when your sorrow is comforted (time soothes all sorrows) you will be content that you have known me.”
Closing thoughts: I hope you have enjoyed these ‘Little Prince’ quotes. Admittedly, they are sometimes difficult to fathom at first. However, like many things in life, the more you think about them, the more they begin to make sense. This is not an easy book to read and the bittersweet ending may leave you feeling a little heartbroken. However, the book offers so many insights into the human condition that it is well worth the time spent thinking about the philosophical ideas contained between the covers.”
- https://www.learning-mind.com/
Freely download “The Little Prince”, by Antoine de Saint-Exupéry, here:
- https://en.martincid.com/
Posted by CoyotePrime at 3:49 PM