"Out of Control"
by DeRisk
"I think it is a fallacy to believe central banks are in control of financial markets, or that there can be any outcome to the current situation other than hyperinflation. If we set aside for a moment the psychological need to believe someone is in control lets us take a look what is in fact some very simple logic. If the logic stands up it relieves the need to analyze much of the current information overload and helps us make better current and future financial decisions.
The logic: Central banks have two monetary instruments: interest rates and money supply. This gives them 4 options:
• Increase interest rates.
• Decrease interest rates.
• Increase money supply.
• Decrease money supply.
The situation they face is unsustainable levels of debt – government, corporate and personal. 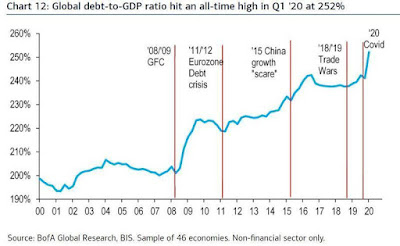 Click image for larger size.
How do their four options play out in this context?
• Increase interest rates: Increasing interest rates increases the debt burden as more now has to be repaid. The runaway train gathers pace.
• Decrease interest rates: Decreasing bank lending rates is arguably not possible with most rates around zero or negative. But assuming rates become more negative, in effect paying for people to take on more debt, this still increases the overall debt burden. The train speed increases.
• Increase money supply: Because debt levels cannot be serviced by the real economy, since 2008 central banks have stepped in with ever increasing amounts of new money (quantitative easing) to service existing debt obligations. The money enters the system as new debt. Alternatively assets in danger of default are simply purchased. Default must be avoided at all costs. The reason for this is the systemic interdependence of the system – if one major component defaults, the consequences can bring down the entire system in a domino effect. Increasing money supply increases debt burden. The train accelerates.
• Decreasing money supply: In 2019 the Federal Reserve took tentative steps towards reducing its assets (taking money out of the system by selling assets and retiring the money). It didn’t work. In fact since inception in 1913 the Federal Reserve has never been able to reduce its balance sheet for more than a few months. To do so now would trigger debt default on a massive scale. The train has no brakes. 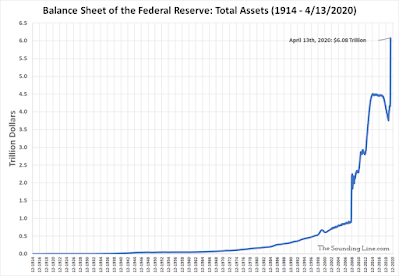 Click image for larger size.
Out of Control: I trust this simple analysis makes it obvious that central banks are not in control. They cannot decrease money supply without provoking the collapse of the fiat system. Keeping interest rates low increases debt. Raising interest rates and increasing money supply both increase indebtedness. Central banks are in a Catch-22 situation. Any action they take leads to the collapse of the financial system or compounds the original problem.
Destination Hyperinflation: Eventually the new money finds its way into the real economy. People cash out their shares or receive their stimulus checks. Price inflation is the result. There is nothing central banks can do. This is already happening. Inflation is higher than official figures. For example: In the United Kingdom food prices have risen 0.8 per cent according to the ONS (an annualized rate of 54 per cent). Pet food prices have risen a truly hyperinflationary 6.2 per cent (annualized: 2,575 per cent).
See also the Chapwood Index. In an effort to continue the pretense of being in control central banks “relax” their inflation targets.
Inflation rapidly becomes hyper-inflation. In extreme cases this can happen in a matter of months. Again there is nothing the two monetary tools of central banks can do. They are caught in a positive feedback loop of their own making: 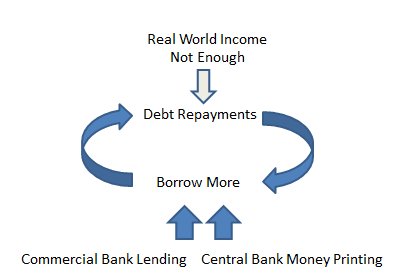 Positive feedback loops are sources of growth, explosion, erosion, and collapse in systems. A system with an unchecked positive loop ultimately will destroy itself. That's why there are so few of them. Germany during the Weimar Republic had a similar positive feedback loop. The central bank felt compelled to print ever increasing amounts of money in order to feed people who would otherwise starve as their money became progressively worthless.
There was a point during the Weimar Republic when the central bank still held sufficient gold reserves to replace the depreciating mark with a gold-pegged currency that would have restored financial stability. But there was never the political or commercial will to do more than take the soft option and print more money. Today we too are well beyond any political or commercial support for anything but the same soft option.
In Weimar Germany, stability only came when the train reached its final destination. However I doubt few people have any real conception of how dark the end actually is: Financially, for nearly four years, the ultimate cataclysm was always just round the corner. It always arrived, and there was always an even worse one on its way - again, and again, and again. The speeches, the newspaper articles, the official records, the diplomatic telegrams, the letters and diaries of the period, all report month by month, year by year, that things could not go on like that any longer: and yet things always did, from bad to worse, to worse, to worse. It was unimaginable in 1921 that 1922 could hold any more terrors. They came, sure enough, and were in due course eclipsed, and more than eclipsed, with the turn of the following year. (Adam Fergusson's 1975 classic "When Money Dies - The Nightmare of the Weimar Collapse". page 1.)
Sound familiar? How could anything be worse than the instabilities of 2019? How can there be anything worse than the global economic shutdown of 2020? The train speeds on. But at least by now we should be in no doubt of where it is headed."
- https://www.zerohedge.com/
○
Jethro Tull, "Locomotive Breath"
Posted by CoyotePrime at 9:42 AM