Chet Raymo, "The Dot and the Abyss" 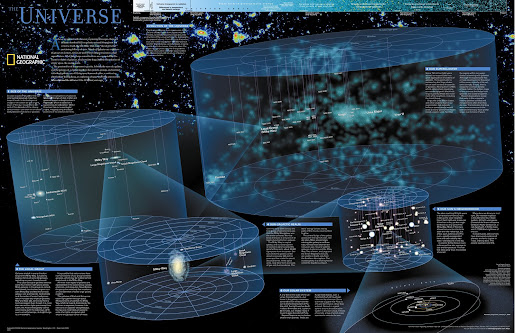 Click image for larger size.
"The Dot and the Abyss"
by Chet Raymo
"Let's take a stroll around the neighborhood. Nearby. Not very far. Let's say 20 light-years from the Sun. A typical neighborhood, for our neck of the galaxy. About a hundred stars. If we travel to the nearest one on, say, a Voyager spacecraft, it will take us upwards of thirty thousand years to get there. So our neighborhood amble will take a while.
First we'll pop in on Alpha Centauri and its two companions. Alpha is a twin of our Sun, a yellow star. In our 20-light-year neighborhood there are half-a-dozen Sunlike stars. Not many stars are bigger or brighter. Sirius, Altair, Procyon. Nothing really hot and bright like Rigel in Orion, and no red giants. All things considered, our Sun is one of the big shots on the block. A dozen or so orange stars, somewhat cooler and less bright than the Sun. A passel of red dwarfs. And a handful of white dwarfs make up the mix. About a hundred in all.
Now let's put the neighborhood in perspective. Imagine the 20-light-year-radius sphere with its hundred stars is the size of the period at the end of this sentence. Then the Milky Way Galaxy would be about the size of your desktop, a great wheeling whirl of stars with our neighborhood dot about two-thirds of the way out from the center. 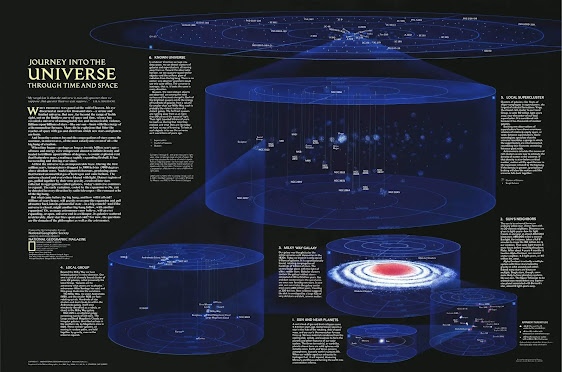 Click image for larger size.
The next spiral galaxy? Andromeda? Another circular tabletop of a hundred billion stars at the other end of the house. How many galaxies? Well, tens of billions that we can potentially see with current technology, spread out around us in every direction for hundreds of miles. And our sweet little Sun and its one hundred neighboring stars are in this period.
We know all of this. But there is a sense in which we don't know it. Psychologically we still live in the cosmic egg universe of Dante, our cozy planet with the Empyrean just up there above the clouds. We have lived through the most breathtaking transformation of human knowledge and we haven't begun to grasp what it means. It’s as if the transformation never happened. We know and we don't know. Maybe we don't want to know."
- http://blog.sciencemusings.com/
Posted by CoyotePrime at 3:06 PM