"The End of the World As We Have Known It" 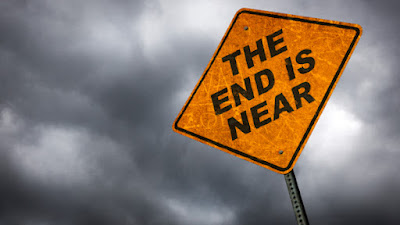 "The End of the World As We Have Known It"
By Bill Bonner
"He who takes what isn’t his’n
Pays it back or goes to prison..."
– 19th century American businessman Daniel Drew
BALTIMORE, MARYLAND – "What we were looking for in the Evergrande story was a hint… a clue… an advance warning of things to come. What happens when you can’t pay your debts? How does it end? With a bang of inflation? Or a whimper of deflation? Our prediction: Both.
Every bubble blows up. Every excess has to be resolved. And every debt gets settled – one way or another. Typically, a bubble brings on a case of “irrational exuberance.” The irrationally exuberant investor pays too much for his assets. The irrationally exuberant businessman stretches too far… borrows too much… and over-extends himself. The irrationally exuberant empire invades Afghanistan. But no one and nothing is ever evergrande, of course. It is only occasionally grand. And when the occasion passes… so does the grandeur.
Too Much Excess: “And then what?” is our question today. We have the answer, too: the end of the world as we have known it.
An excess of private investment usually produces an excess of capacity… and excess output. Too much, in other words. Then, when the Bubble Epoch passes… the excess is usually reckoned with in a DEFLATION. Prices fall… until demand picks up enough to clear the market. The investors and producers, who misjudged the situation, and their suppliers and employees, suffer the losses. That’s what happened in America after the crash of 1929.
Private industry had expanded in the Roaring Twenties… By the 1930s, it produced far more autos and electrical appliances than the market could absorb. Prices – for stocks, as well as consumer items – collapsed. The price of milk, for example, fell so low that dairy farmers dumped it on the ground rather than sell it. Stock prices dropped for nearly three years, from 377 Dow points in October, 1929, to only 44 in July of 1932. Then, it took 25 more years, a Great Depression, and World War II for prices to recover.
Asian Bust: A similar thing happened more recently, when the Japan Inc. miracle economy blew up in 1989. The Japanese, too, had invested heavily to meet the demands of world consumers. Japan was the world’s big success story of the 1970s and 1980s. And by the end of the 1980s, it was on top of the world… with nowhere to go but down. Which is where it went…
Stocks fell 80%. 32 years later, they have still not recovered. Most likely, the coming bust in China will take the same path. It is an economy that grew by investing huge amounts in capital improvements – factories, infrastructure, malls, and housing. Now, it must mark its excess capacity to market… which will mean much lower prices for just about everything. Deflation, in other words. But not the end of the world.
What Goes Up… But the U.S. is different. It is not an economy on the way up – like America in 1929, Japan in 1989, or China today. It is an economy on the way down. And for the last 20 years, it has lived in a bubble world… like an aging action hero, who can no longer do his own stunts. Instead of investing money in new businesses, new technology, and new infrastructure, it squandered trillions of dollars on vanity projects, stock buybacks, executive compensation, and ghastly government boondoggles, including a 20-year, dead-end war in Afghanistan.
Yes, the business cycle naturally expands and contracts. It breathes in and breathes out. Sometimes inflating. Sometimes deflating. Naturally and normally, after a period of price inflation comes a period of price deflation. That is to say, the bubble seeks its pin… and always finds it. But what is especially inflated in the U.S.?
Asset prices. Those are the things the Federal Reserve has been inflating. And those are the things – stocks and bonds – you can expect to deflate in the coming crisis. (Housing is a special situation. Houses are not over-abundant, but artificially low interest rates have made them very expensive.)
…Must Come Down: But taking asset prices down a peg is not the end of the world either. What is the end of the world is when the feds block the markets from correcting… when they insist that assets can’t go down… and when they rig the whole economy to protect their own wealth and privileges. So, let’s walk through what is likely to happen.
First comes the obvious and inevitable market crash. For the fourth time this century, the stock market – extremely overpriced – tries to correct. Left alone, this would clear up the many grotesqueries now blemishing the markets and the economy. Stocks would get cut in half, at least. Many companies would go out of business. The rich wouldn’t be so rich. And then, the survivors would pick up the pieces and build a healthier economy on the ruins.
Fed’s Disastrous Rescue: But that is not going to happen. Because the feds will come to the rescue. They will give the economy another dose of that magic elixir – fake money. And that money will not only be used to prop up the stock market, but also to finance sweeping new squander projects of the government. And this time, the cat will be out of the bag; everyone will see consumer price inflation getting worse. And it will be obvious that the Fed cannot stop it. The bond market – the foundation of the whole capital structure – will heave and crack. And the end of the world as we have known it will come front and center. Stay tuned."
- www.rogueeconomics.com
Posted by CoyotePrime at 9:49 AM