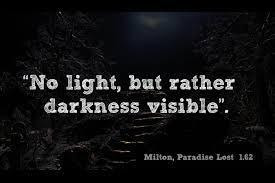 "In Darkness Visible"
by Jim Kunstler
"The signals from the political establishment to Donald Trump ring pretty clear now: get thee hence, thou big-bottomed orange menace to order and sanctity! Has ever a president been lonelier at 1600 Pennsylvania Ave? Lincoln’s “team of rivals” in the drear winter months of 1864 seem downright chummy in retrospect and, of course, poor Richard Nixon stayed swozzled on scotch whiskey during the darkest nights of Watergate, when he reputedly wandered the West Wing halls conversing with portraits of his predecessors.
The other power centers of America, especially the news media, insist that there is no evidence of fraud in the recent election and it’s time to get on with the hallowed ceremonies of transition. The post-Christmas suspense is killing them. Mr. Trump will not be moved to declare that he lost the election - probably for the excellent reason that he really didn’t, if there had been anything like an honest tally of the ballots. They hear murmurings of martial law and the Insurrection Act, and it all sounds to them like an imperial Nightmare on Elm Street. They can hear the tinkle of their lucrative perquisites shattering in the creases of their temporal lobes.
It’s said in the alt.media that the president wishes to exhaust all the formal alternatives before possibly moving onto the novelty steps of contesting this final act of the four-year coup against him, which brings us all the way to January 6, when the electoral college slates are toted up in the House chamber, Vice President Pence presiding. One popular fantasy has the Veep tossing out “certified” votes from states where irregularities were starkest in favor of alt.slates submitted by Republican-majority state legislatures - with Hieronymus Bosch-style Antifa chaos to follow all over the land. Sounds like a low percentage deal to me, but then… what’s actually at stake here?
Not to be too melodramatic, but something kind of like a Manchurian Candidate situation. How okay is it, actually, for Joe Biden, with a record of accepting large sums of money from China’s intel apparatus, to move into the Oval Office, especially after they laid the Covid-19 trip on the world? No problemo, the DNC and its vast network of apparatchiks answer. There’s no evidence of Ol’ Joe colluding for pay!
Oh, but there’s plenty of evidence, and quite a bit of it is in the public annals already, what with Hunter B’s laptop having been partially dissected since, at least, October, and a great tangle of slime-trails clearly revealed in the email logs and his corporate memoranda. And one must wonder if there is additional evidence in John Ratcliffe’s DNI files - you know, the place where every electron of recorded information ever transmitted on the Internet sleeps. You might have forgotten that something a little screwy is going on there, since the ODNI was supposed to issue a public report on the election (and its adumbrations) by December 18 and the fateful report was indefinitely postponed for reasons so far unknown.
Maybe the president’s antagonists are acting super-anxious to get rid of him - and constructing yet another media campaign to agitate public opinion - because there is evidence that other persons in government, persons of both parties, have been importuned by CCP largesse to perform services in recent years, not to mention other incriminating highjinks they’d hoped would fade harmlessly into history with tags such as the Clinton Foundation, the Open Societies Foundations, Skolkovo, Uranium One, the Maidan Uprising, the Steele Dossier, the Mueller investigation… you get the picture… a vast sepulcher of unholy rot where the Deep State has tried to entomb its most shameful secrets, including now the dark deeds of Election 2020.
Problematical, also, is the likelihood - in the event that he actually does concede and agree to exit the scene - that Mr. Trump will transition into post-presidential life with a bale of secret knowledge so huge, reeking, and damaging to his enemies, gathered over four years of access to the nation’s intel files, that not a congressman, senator, or high-up bureaucratic lifer will be left standing as the information dribbles out strategically in the months-to-come of the as-yet hypothetical Biden-Harris (or Harris-Biden) Administration. Imagine what Ol’ Joe, Kamala, Nancy, Chuck, perhaps even “Cocaine” Mitch and the rest of the Beltway gang are fretting about as they chug down their midnight Zolpedims. The Golden Golem of Greatness is not fading away from the Swamp crime scene no matter which way this thing turns out. And don’t forget, he is not exactly alone. Tens of millions of extremely pissed-off Americans are standing-by pretty quietly, for now, from sea to shining sea, behind him."
- https://kunstler.com/
○
Freely download "Paradise Lost", by John Milton, here:
-http://triggs.djvu.org/djvu-editions.com/MILTON/LOST/Download.pdf
Posted by CoyotePrime at 11:56 AM