"Are We Really Going To Build Back Better After A Dark Winter?" (Excerpt) 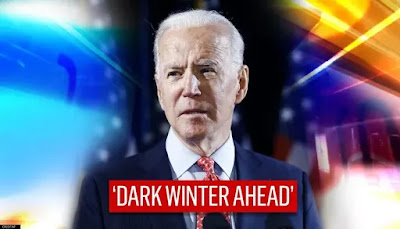 "Are We Really Going To Build Back
Better After A Dark Winter?" (Excerpt)
by Jim Quinn
Samwise Gamgee: “It’s like in the great stories, Mr. Frodo. The ones that really mattered. Full of darkness and danger they were. And sometimes you didn’t want to know the end. Because how could the end be happy? How could the world go back to the way it was when so much bad had happened? But in the end, it’s only a passing thing, this shadow. Even darkness must pass. A new day will come. And when the sun shines it will shine out the clearer. Those were the stories that stayed with you. That meant something, even if you were too small to understand why. But I think, Mr. Frodo, I do understand. I know now. Folk in those stories had lots of chances of turning back, only they didn’t. They kept going, because they were holding on to something. That there is some good in this world, and it’s worth fighting for.”
-  J.R.R. Tolkien, "The Lord Of The Rings"
"With all the talk about dark winters from Biden, Harris, Fauci, tyrannical Democrat governors, pandemic hysteria medical “experts”, and the corporate media paid to propagate the vital narrative, my mind was naturally drawn to the words of J.R.R. Tolkien and his Lord of the Rings trilogy. It is a story of good versus evil, with a foreboding mood of darkness and doom.
To those of us of a conspiratorial nature, according to those who conspired to overthrow a duly elected president for four years and are currently conspiring to steal the presidency through blatant election rigging and mail-in ballot fraud, we believe the darkness engulfing our nation has been initiated by the billionaire globalist evildoers marshaling dark forces in their Mordor on the Potomac.
The globalist elites, along with the Deep State and social media tyrants of Silicon Valley are rich, influential, and arrogant. They have stepped out from the shadows and are now blatantly flaunting their capture of our government, electoral systems, financial systems, mainstream media, social media, and medical complex.
They have gauged the intellectual, ethical, and mathematical aptitude of the masses and found them wanting. They have no fear of significant pushback as they commit treason by stealing a presidential election, trashing the Constitution, destroying small business owners, impoverishing what remains of the middle class, and imposing totalitarian restrictions upon a compliant obedient populace.
A nation once populated by independent minded, self-reliant, frontiersmen has rotted from within, as the country is now populated by millions of weak minded, submissive, docile sheep, allowing themselves to be bullied and propagandized into paralysis, while texting, tweeting and facebooking their every mindless thought to their followers.
Unless the Trump forces can prove fraud on a multi-state basis or are willing to take the drastic step of utilizing the September 12, 2018 Executive Order regarding foreign interference in elections as justification for using the Insurrection Act in overturning the fraudulent outcome of the election, the end of the nation as we know it will have arrived. Losing the two Senate runoff elections in Georgia would greatly accelerate the decline."