"Biden Wants To Give Separated Illegal Immigrants $450,000 Per Person" 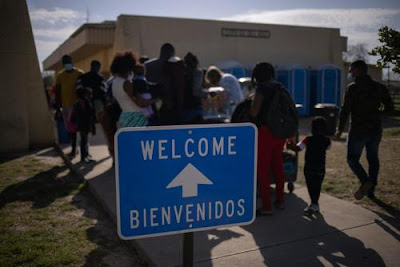 "Biden Wants To Give Separated Illegal
Immigrants $450,000 Per Person"
by Tyler Durden
"The Biden administration is mulling a plan to offer immigrant families separated during the Trump administration $450,000 per person in compensation, according to the Wall Street Journal, citing people familiar with the matter. The payments - part of an inter-agency solution to several lawsuits filed on behalf of separated parents and children claiming lasting psychological trauma could amount to nearly $1 million per family, though 'the final numbers could shift,' according to the report.
According to sources, most of the families crossing into the US from Mexico included one parent and one child. Depending on circumstances, many families could get smaller payouts. The American Civil Liberties Union, which represents families in one of the lawsuits, has identified about 5,500 children separated at the border over the course of the Trump administration, citing figures provided to it by the government. The number of families eligible under the potential settlement is expected to be smaller, the people said, as government officials aren’t sure how many will come forward. Around 940 claims have so far been filed by the families, the people said. -WSJ In total, the potential payout could reach $1 billion or more.
Throughout the Trump administration, thousands of children were separated from their parents (and coyotes paid to bring them into the country) after they had crossed illegally into the country from Mexico. The lawsuits allege some of the children suffered various ailments - including malnutrition, heat exhaustion, and were kept in freezing cold rooms with little medical attention. Some claim lasting mental health problems due to the trauma of being without their parents for several months.
The average amount sought through the courts is roughly $3.4 million per family, according to the report. "President Biden has agreed that the family separation policy is a historic moral stain on our nation that must be fully remedied," said ACLU deputy director, Lee Gelernt. "That remedy must include not only meaningful monetary compensation, but a pathway to remain in the country."
Senate Republicans slammed the plan on Thursday afternoon following the WSJ's report. "The Biden administration’s promises of citizenship and entitlement programs have already caused the worst border crisis in history - a huge cash reward will make it even worse," said Sen. Tom Cotton (R-AR).
The discussions about the payouts have taken place over the past few months among a group of dozens of private lawyers representing the families and government lawyers. Some government lawyers have viewed the payouts as excessive for people who had violated the law by crossing the border, the people said. One government lawyer threatened to remove his name from the case out of disagreement with the potential settlement offer, the people said. -WSJ
"It is a complicated, complex piece of litigation” - trying to resolve hundreds of separate lawsuits at the same time, and "sometimes even more complex to try the cases" said Margo Schlanger, who ran the civil-rights office during the Obama administration at the Department of Homeland Security and now teaches at the University of Michigan law school."
What will the reparations crowd think of this?”
- https://www.zerohedge.com/
WHAT?!
If you need proof that the government is literally insane this will do nicely...
Posted by CoyotePrime at 5:38 PM