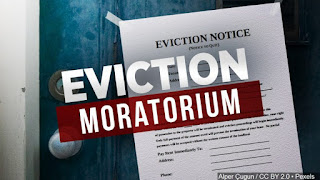 "Moratorium on Reality"
by Bill Bonner
POITOU, FRANCE – "Last week, the newspapers were beginning to fret; hands were beginning to wring. Tears were falling onto the broadsheets. A headline warned about a low-income apartment building in Des Moines, Iowa, that was to be emptied out for renovations. Another one in Cleveland, Ohio. All over the country… some 40 million people who had been protected by an “eviction moratorium,” were now facing imminent homelessness. “Put out” onto the street. Their belongings in plastic bags. Their lives in tatters. No place to go.
Worse, the evil landlords – at least in Cincinnati, for example – expected them not only to pay back rent… but for the damage they caused to their apartments, as well. He sued them for $10,000 each. Our message today: The feds did renters no favors. Instead, they were set up.
Behind on Rent: Thanks to Donald Trump and Joe Biden, millions of people are way behind on their rent. And thanks to Biden’s last-minute moratorium on reality Tuesday… they’re going to get even further behind. The LA Times: "Biden administration announces new two-month eviction moratorium." "The new moratorium would take effect in areas where COVID-19 has been on the rise and last through Oct. 3, the Centers for Disease Control and Prevention said. The moratorium applies to counties facing high or substantial levels of the coronavirus and is estimated to cover about 90% of the U.S. population."
Without a federal moratorium in place, millions of Americans who fell behind on their rent during the pandemic faced eviction, depending on the patchwork of state policies. A year ago, the eviction suspension was supposed to help people get through the trying times caused by COVID-19 shutdowns. But it was the kind of dumbass gesture politicians make to curry favor and win the downmarket vote.
In the Lockdown Panic, people were thrown out of work. Businesses were closed. GDP went down. But the trying times proved much less trying than the headlines imagined. Consumer spending and personal incomes went up! “Renter incomes at a record high,” says a headline at Real Estate Investing Today.
Modern Miracle: Thanks to the conniving generosity of the ruling elite, funded by a mountebank printing press currency, transfer payments soared. In the midst of the sharpest recession since the Great Depression, most people had more money than ever before. What the H…? Yes… you might wonder. How is it possible? But we live in an age of miracles… and in this late, degenerate empire… this one is right up there with the loaves and the fishes.
In the Bible, the miracle occurred at Bethsaida. Jesus was preaching to a large crowd, said to be 4,000 men, plus women and children. And when it was time to eat, he told his disciples to distribute food. “But we have only seven loaves of bread and a few fishes,” said they. The food was distributed. And then, he bade his disciples to pick up the crumbs. These filled seven baskets! And so the multitude was fed, each time collecting more crumbs than the original serving.
Now, 2,000 years later, the feds seem to have worked a similar marvel. But it was no miracle. Instead, it was a devilish trap. The “bread” – trillions of dollars’ worth – was phony, like sawdust… with no nutritive value.
Rent Reprieve… and More: The feds worked their flimflam from both ends. On one end, they distributed stimmies and boosted unemployment benefits (some people make twice as much by not working as they did while on the job). On the other, they reduced expenses. No need to pay rent; forget about those student loans. No point in driving to work… or going out to a restaurant; they’re closed.
Student loans outstanding now cover about as many people as the rent moratorium – 45 million. And they add up to a record $1.7 trillion. When the default process was halted, last year, about 11% of the loans were overdue by 90 days or more. We don’t know… but a wild guess is that 20% of the entire $1.7 trillion is now in arrears – or as much as $340 billion.
As for the rents, Bloomberg estimated, last November, that they were already some $70 billion behind. Now, the figure is probably more like $150 billion. Many of these borrowers and renters, young and old, live “paycheck-to-paycheck.” If they don’t pay their rent or their student loans on a monthly basis, there is a good likelihood that they won’t have the money to make it up when it finally comes due.
Suspending payments – without forgiving them – was like offering free hamburgers on a fat farm. People hungrily took the bait; but they won’t be better off for it. Instead, millions of renters will go through eviction or default. And landlords, deprived of 15 months’ income, will hesitate before investing in more “affordable” housing. Rents will rise.
The rent reprieve was scheduled to end this month. You can imagine how that would have gone down. If the rent were only $600 a month… after a year’s suspension, the bill would be $7,200. Now, with Biden’s latest extension, we can add another $1,800, for three months’ more. That brings the total to $9,000. Which of these low-income renters will have that kind of money available when the bill comes due? We’ll find out in October."
- www.rogueeconomics.com
Posted by CoyotePrime at 6:24 AM