"Be Ready For The Biggest Eviction Horror Show In U.S. History"

Full screen recommended.
"Be Ready For The Biggest Eviction Horror Show In U.S. History"
by Epic Economist
"The month of August has just started, and for millions of Americans, so did a nightmare: A day of reckoning has arrived for renters all across the nation. Almost one year ago, the Centers for Disease Control and Prevention issued a moratorium that protected millions of renters who became unable to keep up with their monthly rent payments. But the moratorium has officially ended, and now billions in back rent must be paid. For some, this means that they have to come up with almost an entire year of rent in only a few weeks to avoid getting evicted. However, for the millions that simply cannot afford to pay what they owe, this means that they can effectively lose their homes anytime now. This situation has been building up for several months, and now it is rapidly evolving into a major national disaster. Welcome to America's eviction horror show.
Up until now, there doesn't seem to be any hope of preventing the most devastating eviction tsunami in the story of the United States.In essence, the expiration of the moratorium means that we are about to witness a years’ worth of evictions over several weeks, which can lead the U.S. to the worst housing crisis since the Great Recession. While some places will see a spike in evictions in just a few days, other jurisdictions will see an uptick in court filings that will lead to evictions over several months. The U.S. Census Bureau estimates that roughly 3.6 million households in the U.S. are going to face eviction in the next two months, as their eviction notices have already been filed. And over 15 million people live in these households that collectively owe as much as $20 billion to their landlords, according to the Aspen Institute.
Even more alarming is the fact that this crisis is bound to get a lot worse in September when the first foreclosure proceedings are expected to begin. Approximately 1.75 million homeowners - which account for roughly 3.5% of all homes - are in some type of forbearance plan with their banks, according to the Mortgage Bankers Association. But the official U.S. government data indicates that 5.9 million homes are not current with their mortgage payments, while 8.7 million homeowners said they have little or no confidence in their ability to pay their mortgage next month, which puts 7.4 million tenants who are in rental properties that are not current with mortgage payments in danger of eviction too, regardless of having paid rent or not. As soon as these proceedings start, we're going to see a tragedy of unimaginable proportions.
In short, an avalanche of distressed renters will be forced out of their homes and into a housing market where prices are skyrocketing and vacancy rates are at all-time lows, meaning that those people will become unable to find housing for an indefinite period of time. Particularly because when people have an eviction record and back rent it's impossible for them to find new apartments, which leaves many in a very vulnerable position, especially amid a health crisis. Whether they shack up with families, seek already overcrowded shelters, or find unsafe dwellings in low-income neighborhoods that lack good schools, good jobs, and access to transportation, the alternatives do not look good. Many will also be overwhelmed by debt. In face of all of this, we have to think about what is going to happen to this country when millions of impoverished Americans are suddenly thrown out into the streets. The eviction crisis can potentially be the catalysts of widespread chaos and unrest all over the nation.
We have to admit that our system is not designed to handle a sudden disruption of this magnitude. While organizations can try to help those that are deeply in need, they cannot solve this crisis. Already, roughly half a million Americans will sleep on the streets tonight. So what will the number be after this massive wave of evictions is over? This is truly concerning. We are heading to extremely troubled times, and this eviction tsunami will without a doubt be a huge destabilizing force in our society. If we have got to this point is because the billions spent by Congress to lift people out of poverty never really provided a real safety net, and their "preventive" measures didn't work. August is going to be a major turning point, and you are going to see a whole lot more trouble erupting as we move towards the end of this year."
- https://www.epiceconomist.com​
○
"Evictions Start With Nancy Pelosi & The House On A 7-Week Break"
○ 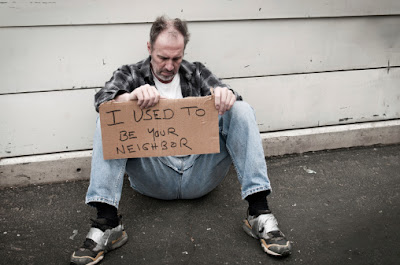 What now for possibly 40 million people?
What happens when they knock at YOUR door for help?
Posted by CoyotePrime at 4:06 PM