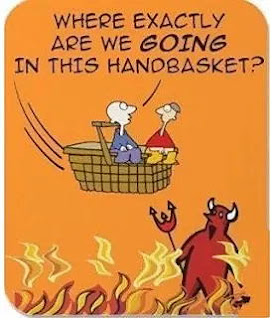 "Just look at us. Everything is backwards; everything is upside down. Doctors destroy health, lawyers destroy justice, universities destroy knowledge, governments destroy freedom, the major media destroy information and religions destroy spirituality"
- Michael Ellner
"As Robert Oppenheimer said a short while before he died, 'It is perfectly obvious that the whole world is going to hell. The only possible chance that it might not is that we do not attempt to prevent it from doing so.' You see, many of the troubles going on in the world right now are being supervised by people with very good intentions whose attempts are to keep things in order, to clean things up, to forbid this, and to prevent that. The more we try to put everything to rights, the more we make fantastic messes. Maybe that is the way it has got to be. Maybe I should not say anything at all about the folly of trying to put things to right but simply, on the principle of Blake, let the fool persist in his folly so that he will become wise."
- Alan Watts
Posted by CoyotePrime at 9:34 AM