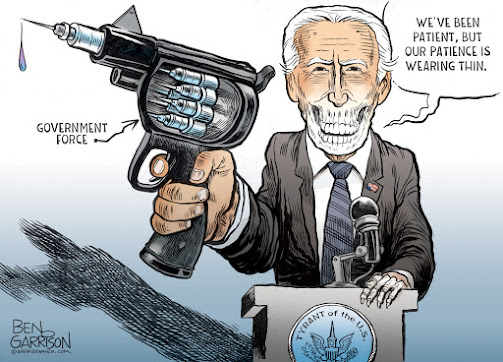 "Ordeal by Narrative"
by Jim Kunstler
"Has doctor Anthony Fauci booked passage to Paraguay yet? Like, on a smallish container barge registered in Cote D’Ivoire, conveying a six months backlog of cars stolen out of Essex County, New Jersey, for detailing and re-sale way up that lazy river to Asunción? The captain has a comfortable guest cabin, price negotiable, but better bring your own food. The US Intel Community will not find the good doctor down there because they will not bother looking for him. And so, the distinguished American public servant will live out his last days in exile among the swooping fruit bats and grinning crocodiles, to the music of toucans screeching in the silk-floss trees (Chorisa speciosa).
Anyway, that’s my fantasy du jour. Walt Disney had it right: America’s fate would be a descent into pure fantasy as the final product of our many twentieth century triumphs. It is increasingly difficult, for instance, to sort fact from fantasy in Dr. Fauci’s magnum opus: the Covid-19 pandemic, starting from the premise that it actually exists. There was some kind of rumpus in Wuhan, China, in January of 2020… folks dropping dead in their tracks on the sidewalks (captured on closed circuit TVs)… folks getting the doors to their apartments welded shut… and then what?
Not much indication of further freak-outs inside China since back then. Perhaps the virus has been raging over there all the while, but a million here, a million there, do you really notice the attrition in a land of 1.4 billion? Or did they just switch off that groove on their narrative machine? The CCP can do that, I hear.
Back in the USA, where you’d have to subtract a billion and then-some in population, something was surely killing folks, though, overwhelmingly, most of those folks were already sick, and old, pretty much in the check-out zone. In 2020, the death of old and sick people was declared… impermissible! Death suddenly had no place in the exceptional order of things American. (Ask old Uncle Walt, who reportedly had his head and its gelatinous contents cryogenically frozen, in expectation of future re-animation via science magic! Still waiting for him to come back….)
Of course, the new medical rules-of-engagement circa 2020 included the denial of early treatment with known common anti-viral drugs for folks coming down with early symptoms of the mystery illness. So, while pretending to object to the implacable fact of death - a certainty of the human condition, according to science - we killed a whole bunch of people by withholding treatment. And concurrently, we rolled out the vaccines promising to “protect everybody” only to learn that it provided other, even more diabolical, routes to death.
And so, we’re left as of last week with the putative leader, “Joe Biden,” of a fantasy cult formerly known as the United States, barking at the populace to line up and get vaxed… or else! Did you flash on Jonestown, Guyana, 1978, the Peoples Temple, and the Rev. Jim Jones exhorting his deranged followers to “drink the Kool-Aid?” Is this whole extravaganza starting to look like a two-year-long bad dream that you’re finally waking up from?
It was heartening to see those football stadiums this weekend filled to their super-spreading parapets with good folks chanting the magic words of exorcism: “F**k Joe Biden.” And with such exuberance! As if returning home to genuine and familiar consciousness after a hypnotic journey to a weird plane of existence where anything goes and nothing matters. They are finally unimpressed after eight months of this gibbering empty suit who so ineptly fronts for a shadow administration operating wholly outside the law. We are going to get to the bottom of just how they put us through this wringer of the national soul, and exactly who was behind it.
After the initial flush of liberation, though, things get real. The hard work resumes and you start to feel pain again. I have a hunch that the weeks ahead will be doozies as the collective national mind undergoes reconstruction and narratives fall away with the season’s blazing leaves. A great sorting out of the real from the unreal lies ahead. Illusions will dissolve. The fog will lift. Some will be blinded by the light, even as we head into the darkest time of the year."
- https://kunstler.com/
Posted by CoyotePrime at 7:31 AM