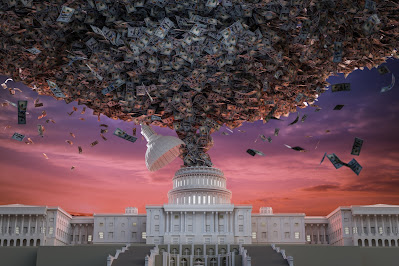 "Inflate or Die"
by Bill Bonner
Normandy, France - "This week, we explored the pampas. That’s where the US is headed, we believe. Chaotic, divisive politics. Government that plays the public for a fool. Runaway spending. Mountains of unpayable debt. Persistent, and sometimes exorbitant, inflation. Are we there yet? We don’t know. But we must be close.
The US is now trapped between two very familiar features of the Argentine landscape: a rock and a hard place. “Inflate or Die,” is how the late sage, Richard Russell described it. You either keep the party going by printing more money… or you pull the plug and reckon with the consequences now rather than later.
There are not many métiers where age is a benefit. Finance is the only one we can think of. Richard Russell. Charlie Munger. Paul Volcker. Henry Kaufman. The young investor can imagine anything he wants. But the old timers are skeptical and suspicious. They’ve seen too many great businesses that went broke, too many political promises that weren’t kept… and too many innovations that later flopped.
Henry Kaufman, born 1927, is among the small group analysts who are still among the quick and still paying attention. Back in the 1970s, as chief economist for Salomon Bros., he became known as Dr. Doom for criticizing government policies.
But then, in 1980, Paul Volcker, America’s last honest central banker, got way ahead of inflation. Prices were rising at a 14% rate. Volcker pulled the plug. He put the Fed’s key lending rate at 20%. Within months, the inflation figures turned around. And in 1982, Kaufman saw that the trend of the last 30 years (towards higher inflation and higher bond yields) had reversed; he told investors that the worst was over. He was right then. He’s probably right again now.
As we’ve shown in previous Diaries… if you’re going to stop inflation you have to also stop inflation expectations. And that means getting ahead of the inflation rate, not trailing along behind as it goes higher and higher. Today, to get ahead of a 7% inflation rate, the Fed should put its key lending rate at 10% – or about 1,000% higher than it is today. That would shock the financial world… and stop inflation in its tracks. It would certainly shock us, too!
Will the Fed do it? Kaufman: “I don’t think this Federal Reserve and this leadership has the stamina to act decisively. They’ll act incrementally. In order to turn the market around to a more non-inflationary attitude, you have to shock the market. You can’t raise interest rates bit-by-bit.”
On this point, the Fed has already expressed itself. The Fed will be “data dependent,” said the Fed chief, Jerome Powell. It will not lead; it will follow where the ‘data’ leads it. But why? Do Fed jefes lack cojones? Do their hundreds of Ph.Ds. lack brainpower? Or is there something else going on? Let us see if we can connect some dots.
Beer Guzzlers vs. Wine Snobs: As we saw yesterday, traditionally, beer drinkers are more likely to pay their debts than wine aficionados. America is a country split between the two. Beer drinkers in flyover country. Wine drinkers on the coasts. Not to pretend to any precision, but you’re not likely to find a good St. Émilion at a roadside trucker restaurant in Oklahoma. You find it in the fashionable precincts… where the decision makers live and work. In America, wine drinkers make the rules. Beer drinkers follow them.
Puzzling? Irrelevant? Is this just a joke? Here’s the punchline: the most obvious downside of printing extra money is inflation. Inflation is a tax… and it falls most heavily on the beer drinkers, not on the deciders. It’s an extremely ‘regressive’ tax, in other words.
If you earn a million dollars, you may spend only $100,000 of your annual income on inflation-sensitive consumer items – including an occasional ‘grand cru’ from Bordeaux. If they go up 10%, therefore, you pay an inflation tax of $10,000… or 1% of your income. Trivial. Barely worth noticing. But if you earn $50,000 you probably spend all your income on consumer items – food, fuel, beer, rent, etc. A 10% increase in prices cuts your purchasing power by $5,000… equivalent to a 10% tax rate. As a percentage of income, that’s ten times as high as the rich fellow. And you feel it; you are noticeably poorer as a result.
And, it’s not the fellow with a can of Bud Light in his hand who is going to answer the “Inflate or Die” question. It’s the people who control and influence the government – people in the media… in Congress… in the Universities… and most important, people on Wall Street.
For these people, inflation will not bruise their daily lives… neither will it dent their balance sheets. By contrast, a real economic contraction would hit them hard. They are the ones who have gained the most from the Fed’s money-printing lollapaloozas. They stand to be the big losers when the bubble pops.
The entire stock market has a value of $48 trillion. The top 10% own about 80% of it. Since 2009, they’ve made about $32 trillion in stock market gains alone. A real bear market would erase at least half of it. By our reckoning, that’s approximately a $3 million loss for every family in the top 10%. And if the Fed refuses to come to the rescue with more printing press money, the loss will likely be permanent, not “transitory.” “Inflate or die?” A 1% annual inflation tax? Or a $3 million loss in a matter of weeks? Which way do you think that will go?
‘Til next week."